Spiritual awakening is not about hype, achievements or sainthood.

It’s very ordinary and wherever we are in the process, we will all at some point let go of everything and turn our whole being into stillness.

Not seeking answers outside of ourselves, and not even seek them from within. (There is no seeking going on at all).

Only when we have given ourselves to the stillness (God/Truth) and we are willing to be uncomfortable in that, because it is in the beginning, it’s very uncomfortable to turn our attention away from the world – of course we still take care of the necessities in life (although sometimes barely), only then will we really experience the hand of God move things around.

There is undoubtedly a period after a spiritual awakening experience where things (life) starts to crumble and everything loses it’s vitality and energy and there’s no oomph to life whatsoever.

But then one day the time comes when we move willingly into the quietness of life, we put all our attention on God – and then from that place the new unfolds, and it will not be as you might have thought it would be.

And whatever that may be for each and everyone (which we can’t know beforehand); it has to come from stillness – not the fake (ego created) stillness but the pure stillness, the essence of who we are – and then from that place a different expressions is being born and life begins for real.

Everything is different – beautiful, peaceful and .. new.

My shortest post ever I think, but I felt inspired to write it because there are so many people asking the same question (and I have too in the past) “what to do? what to do?” when they are in the process of transition between the old and the new, where they have left the old but the new has not yet been shown, and the “solution” is very simple so it doesn’t need much explanation.

Many people want to have techniques or means/tools to try to get away or move forward from that stagnant place – and my reply is; you need to get still, don’t resist it, because no matter how hard you try to avoid that, that is what it all will lead to eventually anyway.

To the surrender to stillness.

It has to, because that’s where life springs from.

And it’s not passive at all – it’s very dynamic and full of vitality, but it’s not aggressive or assertive and it has no agenda other than enjoying itself.

The sooner we surrender to that, the sooner it can begin to express itself fully. 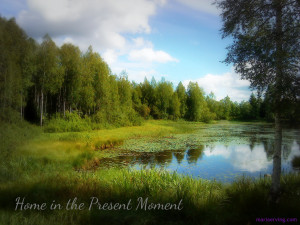 mariaerving.com/feeling-caught-between-a-rock-and-a-hard-place-spiritually (One of my older articles)

mariaerving.com/a-new-way-to-interacting-with-people (See especially the links in the end of the article) 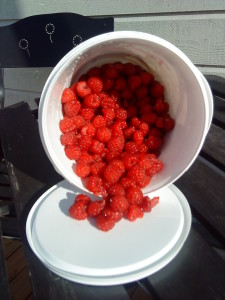 How about stepping away from the computer for a while?

Go out and pick some berries or something, like I have just done! 🙂

Everything you want is in the flow

Leave struggle and feeling frustrated and stuck behind you and start moving through life feeling ALIVE in a magical flow with a deep sense of connectedness, absolute trust and inner calm and confidence.

When you get in alignment you will have every area of your life completely change and transform for the better.

Life has a magical way of clicking into place once you get in alignment with it.

OPTIONS: Single sessions via Skype or in person, or a package of 4 sessions for even greater progress and deeper growth.

I couldn’t have kept it all together had I not experienced a PROFOUND shift during and after my session with you.

You are truly a gift to us all!

I can’t even begin to express how much I have gained internally after my session with you. You have been an instrument of peace in my life. Thank you from the bottom of my heart.

She is a thought leader in the industry

Maria Erving is a wonderful author and coach. She is a thought leader in the industry.

Working with Maria was one of the best investments I ever made in myself. It has been one of the single most transformational experiences of my life. Can’t recommend her enough!

Maria, what I’ve learned through you is beyond priceless!

You have inspired me more than any human being. I have gotten more from what you than all the churches, clergy and spiritual organizations combined.

She brings a light into the lives of all she touches

Maria is a compassionate, motivating teacher who uses the power of energy to bring you to action and change your life. She is so uplifting, inspiring and brings a light into the lives of all she touches. Do not hesitate for a moment of being guided by Maria, that is something you will never regret!

I don’t even recognize the person who started working with her a few months ago. Maria clearly sees what is blocking, stopping or limiting you. Working with her has been more transformational than any other thing that I’ve tried. There have been profound shifts in the way I see myself and the world, so many shifts in my energy and life. I find myself so much lighter and freer. Thank you Maria!

.. And he did!! Maria, you’re an angel and I will always be grateful to you. My deepest gratitude for being there for me. Love and Peace! God Bless You.

Maria is a gifted and talented visionary

Maria is a gifted and talented visionary with a very inspiring journey. Working with her, even through the distance, was a pleasure! Thanks for the Blessing!

She quite honestly changed my life

I found Maria through a series of synchronistic events and she quite honestly changed my life. I was miserable and she helped me find my passion and inspired me to pursue it. She sees no limits to your potential. Working with Maria has been invaluable to me and I highly recommend her.

I’ve had a HUGE shift

Maria’s intuitive abilities have been instrumental to the personal growth I’ve experienced as a result of working together. I’ve had HUGE shift in my beliefs. Her undivided attention, presence and unique ability to read your state helped me to breakthrough and release old patterns and replace them with new self-empowering practices that have truly shifted my life. I would highly recommend Maria to anyone. I am forever changed and forever grateful!

She helped me recreate my life

Maria is amazing. She is a gift to this world with an incredible intuitive ability. She has helped me to refocus my energy and recreate my life.

I have never felt more alive

Maria’s awareness of energies and the conditions of the mind are truly impressive. She knows exactly what’s going on. She is so attuned to other peoples’ energy that she just knows where you’re at. After working with her I have never felt more alive and aligned to my true self.

I woke up this morning without those thoughts. This has not happened in a long, long time and I can’t be happier. My mind felt like an empty piece of paper in which I could write my new, happy story.

Maria led me through a powerful transformation

She helped to empower me to boldly step into Life! Maria is changing the world by her presence. She’s leading people to a new way of being. She’s rare because she’s able to see where you are at in your journey. I feel so incredibly grateful that she has been a companion during this time of change. If you feel drawn to connect with Maria I encourage you to move forward with confidence.

Maria is beyond amazing

I feel blissful and I can’t thank you enough for that. I don’t know exactly how you managed this, but you have really made a difference in how my mind works. I recommend anyone who is trying hard to be truly free and really start walking down the path of self fulfillment and happiness to book a session with her.

Her guidance and energy is profound!

I couldn’t be more grateful to have Maria in my life. Her guidance and energy is profound!

My life has changed dramatically

Since plugging in to your wisdom my life has changed dramatically. You pointed me in the right direction and that gave me courage to continue moving through whatever process I may find myself in and the ability to take refuge in the truth within me. Thank you for helping and giving me the encouragement to stand strong amidst experiences that I didn’t understand.

I was taken over by peacefulness

After our session, something happened within me that I cannot explain nor would it even make sense to anyone. There was a part of me that felt my being been taken over by a real peacefulness that I’ve never encountered before. Sounds odd but it’s the truth.

I feel freer than I have in years

When I first started working with Maria, I knew right away she was something special. I felt something shift in me. Almost immediately I started to feel lighter. I felt the old, limiting beliefs and stories release from my mind and I felt freer than I have in years.

All I can say to you is Thank You

I find myself at a loss for words. All I can say to you is Thank You. I say that from the bottom of my skeptical, over analytical heart. I cannot recommend you enough to other people, you are a gift! Thank you!!!

I didn’t expect this!

Hi Maria, I just feel compelled to write you. I certainly did not expect this, l have had periods of such intense joy and bliss, Love with an underlying peace that’s been consistent. l don’t understand it intellectually but my heart see’s it clearly. It’s been wonderful, I feel a true sense of connection and being rooted with in and there is just an openness and trust, and a sense of wonder and amazement. I am truly grateful, Thank you. Sincerely,

I cannot describe how happy I am

Maria, you are truly godsend! I cannot describe how happy I am. I have no idea what you did and how you did, but I am truly grateful to you. My words in this email cannot thank you enough. Today is the first day that I woke up feeling as if I am ready to take on the world. I am so glad that I reached out to you. I am truly grateful to you. I will definitely recommend you to my friends and family!

I got more than I could ever hoped for

I had such a positive experience working with her. I feel like a huge weight have been lifted and I have so much more perspective on what I have been struggling with. I feel more myself, more at peace and all around better mentally and emotionally since my sessions with her.

I could feel the tension leaving my body

I could feel the tension leaving my body and a calm came over me by just being in her presence. Everything flows so naturally with her and my life is more beautiful and I feel at peace knowing I have her by my side. I feel blessed to have her in my life.

I just wanted to say thank you so much again for our session yesterday, I’ve never had a conversation like that before and it was truly amazing. I could feel weight lifted as we were talking and for the first time my mind did not try to make sense of things, it was all truly felt in the heart space.