Stop Being So Hung-Up On Your Ego!

Stop making your ego so important.

It’s incredible to hear people sometimes how hung-up they are on their ego’s and how desperately they want to get rid of it, yet they give it all the attention of the day.

We do all have a human aspect to ourselves as well as the higher divine aspect, but many people tend to forget that and thus make their life miserable by making their humanity wrong in some way just because they face some kind of challenge in their life.

We all have them from time to time, even “enlightened” people have their human journey to be played out as it will; we all encounter challenging times or situations in our lives no matter where we are spiritually.

We are not just divine beings, we are human beings as well.

So don’t forget your humanity and all that it includes, like for example relationship troubles, financial challenges, sickness, whatever it is, they happens to all of us in some regard and at some point in our lives no matter how awake we are.

Today I want to invite you to stop being so overly concerned about what you ego thinks and what your ego this and that; take your focus off of your ego for once!

If you hear yourself saying and thinking in these lines often; “my ego thinks..”, “my ego says..”, “my ego made me..” etc then it’s really time for you to stop being so hung-up on your ego and instead shift your focus towards what your Spirit thinks and says.

What about your Spirit, the divine aspect of yourself, the God within you?

What does it say?

How about being more concerned about that today?

Stop the ego track and begin saying things like “my Spirit says, my intuition says, my inner knowing says” etc instead of what your ego is saying all the time.

“My ego thinks, my ego wants, my ego this and my ego that”

Who cares what your ego is saying!

The only one who really cares is the ego itself, this is all an ego-game in itself, it makes itself so important.

Forget about the ego! Let it be!

Turn to the light instead.

Get back to reality and refocus; what is your aim here?

I know that for all of us at every point in time, in every situation, our aim is always peace. (People even go to war for it!).

So whatever your personal issue, your aim is probably what we all want; it’s probably peace for you as well.

But you won’t get peace for as long as your preoccupied about thinking of what your ego is doing and thinking all the time.

The way past all this is to stop indulging in this inner battle you have with your ego, or the constant battle you’re having with other peoples ego’s.

I mean, just freaking stop it!

Realize that the ego is the one that begins the spiritual journey and the ego is the seeker of Truth in the beginning but at some point a shift happens and the identification shifts from ego to Spirit (true nature) and when the Divine within you comes alive (or wakes up) then the ego will no longer be there because it’s not the ego that awakens.

It will still ‘be there’, but in the background of your life experience, and so when this happens you become naturally more concerned about what the Spirit wants and not what the ego wants. (Which is a lot about finding faults in you and others.)

Up until this happens (the shift within you) you will experience the ego telling you about what’s wrong with you, and it even tries to get rid of itself!

It’s the ego that tells you that your human challenges and issues are wrong and bad.

But we’re both human and divine, those are two aspects of ourselves so we should also embrace our humanity and not make it wrong or as being “of the ego”.

Our human nature doesn’t equal the ego, it’s not the same thing but sometimes people perceive their humanity as “ego”.

The ego is a thought or belief in your mind; the person most people take themselves to be, but your human-hood is suppose to be a beautiful experience despite of its challenges.

It’s not to be shunned.

You will still have desires even after you’re ego has been moved to the background of your life.

It’s not “ego” to have desires and preferences, that’s just silly thinking, its all ego thinking that so that you won’t grow and so that you make yourself small thinking it’s somehow ‘spiritual’ to not have any “wants”.

Surrendering your desires to Life is not about making yourself small but to identify with the Divine, so it’s not a “sacrifice” but an emerging with your true nature; you expand (not contract) into the nature of the Divine, which is your very own Self.

It’s about surrendering the ego’s will and letting yourself be swallowed up by Truth and disappear into your original consciousness.

And then you will realize your full potential, but only then, because the ego has no place in this; it can’t exist in Love.

Stop making yourself wrong and ‘bad’.

Next time you say “my ego this and that”, turn it around and check what your Spirit says and then go with that; stop indulging in the ego and what it says and does.

And if you do something that is against your true nature (a ‘mistake’) then forgive yourself and move on.

Don’t go on talking about how your ego ‘this and that’, just recognize your mistake, forgive, drop it and move on with your life; get back on track with yourself again by simply ignoring your ego because every thought you have about your ego only feeds it.

Don’t give it so much attention and importance, but don’t fight it either, just let it be.

The ego is also the level that the world operates on right now (our collective consciousness) but you don’t have to take part in that by going to war against it as you do with yourself.

Instead bring understanding (awareness), compassion and love to the world as well and operate from that state of consciousness also in the larger aspect of life as we are all part of humanity together.

People are so hung-up sometimes about ‘themselves’ (=their ego) that they forget about the world, they get all uptight about themselves, about their problems and personal issues, and just by seeing that (through self-awareness) we can almost immediately see and realize how silly we behave sometimes when we are all caught up in ‘me, me, me’.

Maybe you see that in yourself now that you read this. If you do, then be light-hearted about it and have a good laugh about your own (human) silliness.

Nothing needs to be so serious.

So stop making ‘the others’ wrong and start being right yourself.

Be the true you, that’s all you have to do. (Drop who you are not; drop the mask).

Stop bringing resentment, bitterness, anger or “wrongness” into life by being so overly sensitive and concerned with your ego.

Just let if be!

For once, let it be.

Shift your focus and bring in peace, love, understanding for another, even your so called enemy or your opposition (which can be a family member for example).

I don’t personally believe that every person we meet that is challenging to us is an aspect of our own self and that we should work on whatever imagined issue we have with that person as something that is within ourselves.

That too is an ego-game so that you will always do ‘inner work’ on issues that has nothing to even do with you.

What if there’s nothing wrong with you?

What if the person in front of you (the annoying, irritating person) is there to teach you something completely different than what you believe?

What if it has nothing to do with your ego?

Can you imagine that?

Here you are, bending like a pretzel for your ego not even knowing you’re doing it.

So stop the blame and shame game, the guilt-trips and the constant fault-finding in yourself and others.

Just love for once.

Just leave it at that for once.

“Maybe there’s nothing serious at all to this”.

Yes, maybe there’s nothing to it other than your ego wanting to make everything wrong, maybe that’s all there is to it.

Maybe you can jolt yourself out of the quarrel and inner war and the conflicts in your life by just simply forgiving yourself and the other and decide to just relax about the whole thing and enjoy this moment because it’s really all we’ve got.

We have this moment right now and beyond this we don’t know.

So why waste it on thinking about your ego and what it thinks, says, and does?

Why not start thinking about what your Spirit thinks and wants to do and then just do that?

That’s my invitation to you today.

Release yourself from the ego by not thinking about it. Think about love instead.

Just enjoy life. It can be that simple.

The ego makes everything be so incredibly serious and “deep” all the time; “oh my God that person is such and such, it must be something wrong with me because everyone I meet is myself on some level”.

And maybe your health issue has nothing to do with how you are or how you think, or your Karma or whatever it might be that your ego is blaming you for, maybe it’s just an illness, and that’s that.

Sometimes people think that every illness or sickness has to do with problems in the person so they go around saying (to others) that; “oh, he/she must be holding things in (repressing) because she coughs a lot” and whatever other ideas they have, while in reality it may just be a cold, that’s all it is; a person having a cold.

But no, the ego just has to make everything wrong doesn’t it.

I don’t know about you but it’s hilarious, I’m laughing with amusement because of our humanness as I write this.

We are so funny sometimes we humans, aren’t we 🙂

So again, my invitation today is to just drop the ego obsession altogether, don’t engage with your ego, just let it be, and when you do you will feel a relief and calm coming over you.

That’s Life, in its true essence, as it can finally breathe again when you let go of the uptightness and wrong-making that the ego is all about.

Today let all that go, let Life come in and let it breathe through you again as it’s suppose to do. 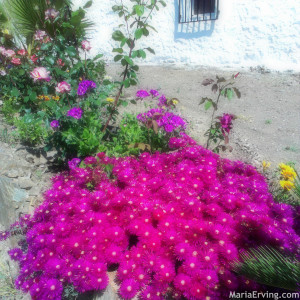 Think of all the beauty you miss out on by focusing on what’s wrong with you and others,

while all the time you are beautiful, the soul (essence) of the other person is beautiful,

and you can find beauty all around you if you look for it,

if you just give it a chance to come into your conscious awareness.

Don’t Make The Mind Into An Enemy

Who Do You Think You Are, Ego?

Before Thought Enters The Present Moment

Laugh The Seriousness Off! (Ego takes itself to be so important)

Stop all doing and just BE.

This weeks Teleclass was about the choice between Love and Fear and the ego’s pursuit of spiritual highs (31 min.)

Join and listen to it here:

Align with the Flow and Transform Your Life