Wanting To Not Want Is a Want Too

When we have a spiritual awakening experience, we realize that whatever we wanted and desired for ourselves previously has no meaning whatsoever anymore. Not because we have decided it to be so because it has nothing to do with will-power.

We just realize that nothing the world has to offer is desirable anymore as it used to be.

Of course we all have the basic desire to have roof over our head and food to eat, have likes and dis-likes, preferences and all that stuff, what I’m talking about is the wishes we previously had, the ideas we held of how an ideal life would look for us. (Which is always anything but what is right now for the ego, it will never be satisfied with the present moment).

This is not a process that we have control over, it’s not a choice that we make consciously by will to not have wants, that happens by itself and we simply find ourselves not having wants anymore.

If we fall into the trap of taking other peoples beliefs and experiences and we make them our own on a conceptual level, we are kind of trying to fool or manipulate life, and that is one thing we cannot do, ever.

To try to make ourselves to be a person with no wants, thinking it’s spiritual and noble somehow, that would be a want too. Then we would define ourselves to be ‘a person who don’t have any wants’ (a.k.a. a spiritualized ego that thinks it will get what it want if it pretends to not have any wants..), whereas what I’m talking about is that the whole concept of wanting is just not there anymore, and it feels completely foreign.

The future planning and goal setting looses its meaning as we realize there is only a constant Now, and whatever goals or plans we might have to do for practical reasons will be just for that reason only, and not for where we think it will lead/end result.

It’s just not there anymore.

Something is presented to us, we feel drawn to contact someone, or inclined to go in a specific direction, but we have no clue whatsoever why, or what will come out of it, because our stories and opinions don’t really have no meaning and we can see that clearly.

We simply go where our hearts are leading us and we stop asking why.

In a way we are enjoying not knowing, and there’s freedom in that.

But it’s not a choice for the sake of getting freedom of becoming free or liberated, it’s just an instantaneous happening where the decision and action is made in the same instant, before the mind gets in with it’s reasoning and explaining.

A flow if you will. The happening is happening and we go with it, responding to the impulses of it in the present moment.

We are in a place of complete trust, and our dwelling in that space has no ulterior motive, we don’t “try” trusting with an agenda of getting anything out of it!

Therefor the wants can’t be there, it’s like we would be needing to want to breath, to have our hearts beating; we don’t have to want that, those things happen naturally.

So does Life happen.

No need to want anything – no need to let go of wanting either.

Be where you are in your own evolution, that’s what’s most important, not to go ahead of yourself, not trying to be more spiritually evolved than you are thinking it’s ‘spiritually correct’ not to want anything.

A few years ago I met a woman who was miserable because she thought she wasn’t suppose to have any desires according to her beliefs/faith. In her mind it was wrong/a sin to have them, so she went on living life having wants but never expressing them, on the contrary she was repressing them and thus suffered, because she didn’t allow herself to be who she was.

With horror she told me that it’s a sin to want and warned me from those things (this was back in the days when I had endless lists of wants, wishes and desires) and she was the most depressing person to be around, because she didn’t allow herself to have the wants that she secretly had anyway. (Like you can fool God! Believe me; God knows your heart:-)

Have wants or don’t have them. Nothing is wrong, right or better than the other.

Life actually only wants you to be who you are. And that’s all It wants.

Let go of all rules of how to be and not be and try to have more fun, let go of seriousness, lighten up, laugh more, be childish, even be all grown up and serious if you want to, but whatever you do, be it fully, don’t hold back and don’t pretend.

Ah, what a liberation! 😀 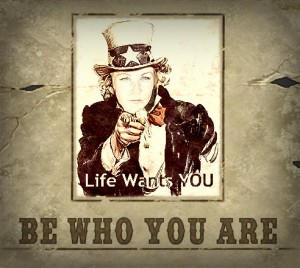 This is a reminder to let go and lighten up. Enjoy life

Lets laugh at the human pomposity, at our own thought-patterns, the human conditioning, the emotional drama, the inner story-making… laugh it all off!

Laugh at all the seriousness of it all and see how the ego takes itself to be so very, very important!

Shake it off, laugh it off, dance it off, be silly and playful about it!

Get in Alignment and Transform Your Life

When you get in alignment you will have every area of your life completely change and transform for the better. Your relationships (with everything in life), your sense of aliveness, well-being, freedom and inner peace, everything shifts for the better as you open to a higher level of consciousness and awareness.